On the occasion of commemoration of India’s 67th Independence Day, we take an opportunity to reflect on India’s progress on the path of innovation. India has transitioned from being a agriculture based economy to a services based economy where it’s competitive edge lies but of late, there has been a renewed focus on knowledge based outsourcing, technology start ups and focus on building an innovation ecosystem.

Last year, Google announced its plan to invest $10 million to nurture and support 10,000 startups in India over the next five years. Nasscom has many such initiatives in participation with companies like Google and Microsoft to boost the ecosystem.

The department of electronics and information technology (DeitY) has received proposals for investments worth a total of about Rs 65,000 crore in the area of semiconductor and electronics giving manufacturing a much needed boost.

The above statistics on entrepreneurship indicate one crucial development that India is much more experimental today than it was yesterday. India is observing a shift in mind-set where a growing number of graduates from top schools like IIM and IIT opting out of the rat race for placements and setting out on their own with start-ups and innovative business ideas. This trend goes beyond the IIMs, with entrepreneurs starting out on their own with just one or two years of work experience after having passed out from Tier II institutes as well.

Innovation is most definitely on the charts and the number of product start-ups is on the rise. Local manufacturing is getting promoted and funded. The services sector which used to rule India

has started taking a back seat while the start-up ecosystem is flourishing and thriving. Companies that were fledgling start-ups a few years ago are going global. Industry bodies and think tanks are coming together like never before. We are continuously moving towards becoming a nation that is open to ideas and experimentation and risk taking.

In this transformation story, a new dream is born every day, a new idea is generated; a new project is funded by an ever-growing class of people and organizations whose belief in entrepreneurship is growing daily. 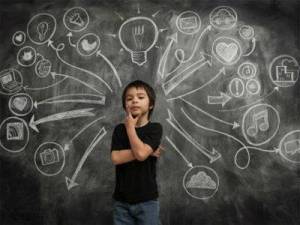 It’s a well-known fact that India is the global IT services hub but what about the software product space? And that’s where iSpirt comes into the picture. Founded last year and an acronym for Indian Software Product Industry Round Table, iSpirt is a consortium of 50+
Indian software companies, trying to promote the tech entrepreneurship in India.

One more interesting concept by NASSCOM is its 10,000 Start-ups that aims to enable incubation, funding and support for 10,000 technology start-ups in India over the next ten years.

Limited funding to pursue innovation? That is where the concept of crowd funding comes to the rescue. Encouraging innovators and entrepreneurs taking that extra leap include the likes of Wishberry.in, a Kickstarter-inspired crowdfunding platform. The Goa Project is a start-up event platform that offers a perfect mix of like-minded people, your favourite topics to discuss and a beautiful beach in the background! Entirely volunteer-based, The Goa Project,
launched in 2013, is an “unconference” – an experimental platform that encourages cross pollination of people across different fields, crowd-funded by Wishberry.in.

Looking at the current scenario where the Indian government is promoting the local manufacturing and boosting the local players, technology spending is increasing 15-20 per cent every year. The year 2014, will be marked as an important year as CeBIT, the world’s largest IT business exhibition and conference, is launching Indian version this year, in Bangalore, which will be an annual affair and a showcase for domestic companies.

Bringing CeBIT to India is a leap forward from the perspective of making the nation visible on the global scale of Innovation. It will collaborate with government bodies, private organizations
and think-tanks in order to build on the local ecosystem and take the country’sIT, business and the consumer markets to the next level.

If we trace India’s progress over the past 20 years, it has been phenomenal.Today, India is indeed, one of the world’s fastest rising economies, and contributing significantly to the world economy.

As India marches on, we are very hopeful that we will have more meaningful and impactful innovations which will improve the lives of two billion people at the bottom of pyramid across the globe so that each one of us can truly celebrate Independence!!

FIFA 2014 World Cup will also be remembered for use of technology.

One of the things that FIFA World Cup 2014 will be remembered for apart from the Brazilian carnival setting, the humiliating defeat for the hosts and generous number of goals scored will be the use of technology.

Noticeable amongst those are the score line technology which helps the referee decide whether it is a goal or not and instantly send a message to the wearable watch like device of the referee.

This has been made possible by Goal Control 4-D system which places 14 cameras on the stadium roof, seven per goal and filming upto 500 frames per second. 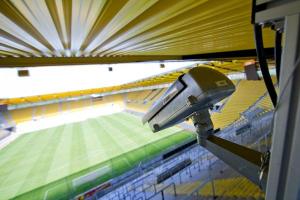 The other interesting piece of technology is the invisible spray made from vegetable oil which disappears after one minute.The unique feature of Goal Control technology is that it claims to be very accurate and flexible, whereby all current goal post, white goal nets and football can be used without any modification.

The other technology which is being used in the World Cup for the first time is a foam like substance to ensure the players are in line during free kicks. Called 915 Fairplay it is a vanishing spray which referees will use to indicate the line behind which players must stand to maintain the ten yards required. 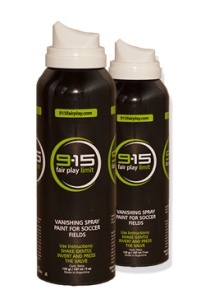 It is also used to mark where a free kick must be taken and the white line will vanish after a minute.The spray has been made from vegetable oil derivates and was used for the first time in a competitive match in Belo Horizonte in the year 2000. The inventor, Heine Allegmagne has obtained a patent for the company which developed the vanishing spray. 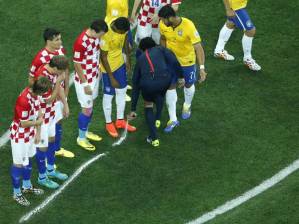 So the FIFA World Cup 2014 has a lot to cheer about with the new gadgets and techniques being used apart from the good old referee disciplining the players by showing them the yellow card!!